PHP is a programming language famous for web development. The blogging platform Wordpress uses PHP, and that's just one of the many websites that trusted the language. In fact, according to w3techs.com, almost 80% of web servers use it.

One of the reasons for that is simply PHP's age. Many other web server development technologies are younger, so PHP had the time to rise to fame. Additionally, content management systems such as the already mentioned Wordpress, but also Drupal and Joomla rely on PHP, which in turn means the websites built on them rely on PHP as well. Finally, PHP is installed on every web hosting server.

When you use PHP, you can benefit from its web frameworks, Laravel being the most popular one. It’s popularity is comparable with that of Python’s Django or Flask. In fact, at the time of writing this Laravel has 61k stars on GitHub, compared to Flask’s 51.5k, and Django's 51k stars. Laravel, as well as other PHP frameworks, can help you build your project faster.

All in all, PHP is a great, mature programming language you should definitely consider if you’re after building a website.

Python and PHP are both object-oriented and interpreted languages that can run on a variety of operating systems and environments. Both languages are dynamically typed and boast impressive IDE (integrated development environment) support. Both PHP and Python also stand out when it comes to their syntax, as they are much different to C-style languages. PHP is a champion of web development - it is estimated that as much as 80% of all websites use some version of the language.

However, its web-based beginnings make it a difficult tool to use in general programming - it requires complex structures and extensions. Python on the other hand has been recently gaining traction in the web-based world and as many fintech companies are becoming fond of the language it is gearing up to take over some of PHP’s market share in that department.

Both languages have their vocal supporters and both are also quite different. If you’re wondering what would be better for your web project - the ubiquitous but slightly outdated PHP or a relatively new coming (in this area) Python, don’t worry. Below we discuss all of the most important aspects of each language and suggest which one will satisfy your software needs best! Behold, Python vs. PHP: the final throw down.

The TIOBE Programming Community index is an indicator of the popularity of programming languages compiled monthly and based on the number of skilled engineers world-wide, courses and third party vendors using a given language. You can read more about the index and the organization at: tiobe.com

Python reigns supreme here, with almost 10 p.p. higher usage rating (and rising!) than PHP, placing third overall. TIOBE indices over the years indicate, while PHP has lost its initial popularity and remains strongly in the bottom of the top 10, Python has had an impressive rise over the years, especially in the early 2000s. It is now a far more popular programming language than PHP according to TIOBE, and the upward trend indicates this difference will only deepen.

Stack Overflow’s 2020 was the 9th consecutive year for the survey with 90,000 developers responding. More information on SO’s website. 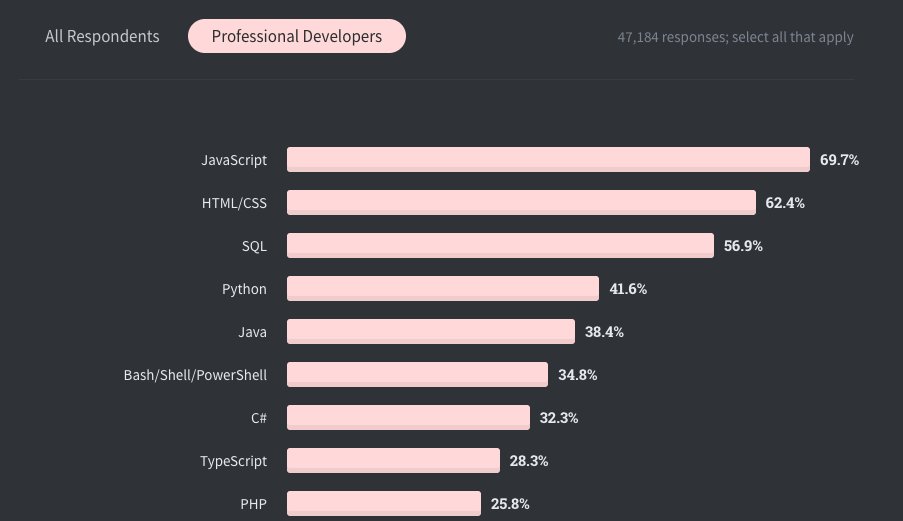 Python has almost double the popularity PHP does when it comes to Stock Overflow’s respondents. PHP is used by slightly more than a quarter of professional (and otherwise) developers. Python on the other hand has surpassed 40% and is continuously rising in popularity.

Python is a clear champion amongst GitHub users. What’s more, because of its downward trend, Bren Frederickson classified PHP as a language to maybe avoid. He does explain however that this decline in popularity may be because of the influx of the new MAUs which are the basis of this metric.

Other rankings comparing Python vs. PHP in numbers

Python vs. PHP from the managerial perspective

Project managers and CTOs use different criteria when assessing the usability of a programming language compared to learners, developers, and engineers. We delve into some of the most important aspects of software development from a managerial and institutional perspective below to see whether Python or PHP are a better choice for your team.

Python vs. PHP from developer perspective

Because both Python and PHP are open-source, they boast huge and very active communities which contribute to the languages themselves constantly and offer support for newcomers and experienced users alike. PHP has a famously big community which adds greatly to the language; some critics have argued that it’s too large. Python’s community is constantly growing and seems to be more diverse in terms of background (in coding as well).

Apart from versatility (where Python truly is a general purpose programming language and PHP a web “lingua franca”), the main difference between PHP and Python may be their long-run potential. PHP is quite clearly becoming a legacy language, whose users will mainly maintain the existing systems. Python on the other hand is booming, and if this trend continues, will become a better tool for developing new applications (for the web as well) than its competitor. As far as comparing PHP with Python in terms of usability, if the project is relatively simple, web-based, and associated code is already in PHP, it may be worth sticking to the web development classic whose 7th version is superbly fast. However, if your project is more complex, potentially innovative and requires reliable, secure and clear code, Python is a clear favourite.

Python vs. PHP: differences and uses