Java is a very popular programming language that has been around since 1995. In fact, in May 2020 it fell from no. 1 to no. 2 in the TIOBE index of popularity for the first time since 2015 (It was surpassed by C).

Java is a compiled, statically typed language known for its stability. It requires more code than some other programming languages, and even though that means building a product may take longer, it also makes the software more stable. Additionally, Java has many libraries that add to its stability and make coding easier. It is also often used to build mobile applications, because it is the official language of Android. This means that if you’d like to build Android apps, learning Java would be a good idea.

Despite fierce competition, Java still remains widely used. Over the last couple of years, starting in 2017, the pace of releasing new versions of Java quickened significantly. Since then, the new versions come out every 6 months, with the last one being released in March 2020, and the next one planned for September.

That being said, Java is not the easiest programming language to learn. It will most probably take you a while to become proficient in it. However, its popularity and the need for Java developers will make it worth it.

Python and Java are both high-level and object-oriented general purpose programming languages. Both are extremely popular (with Python’s relatively recent rise to popularity) and between them they can cover almost any type of application imaginable. Choosing which one is better for a given project is best done by optimizing the parameters we want to achieve. Ahead, one of the most popular of software development debates: Python vs. Java.

Which one would you choose? Python, which is clean, readable, allows for impressively quick development and implementation, and offers possibilities in machine learning? Or the more complex and time-consuming Java with its wide and robust libraries, relatively easy scalability and slightly shorter compilation time? If you don’t know the answer yet, fear not. Below we discuss all of the most important aspects of each language and suggest which one will satisfy your software needs best! Python vs. Java: the final throwdown.

Java vs Python: in numbers

Although a language’s popularity does not necessarily mean quality and best fit for particular software design needs, a significant number of users is needed for a project to be easily recruited for and managed. See below for the comparison of popularity Python vs. Java and its brief explanations.

Stack Overflow’s annual Developer Survey is, according to the creators, the largest and most comprehensive survey of coders around the world. 2020 was the 9th consecutive year for the survey with 90,000 developers responding. More information on SO’s website: https://insights.stackoverflow.com/

Python has surpassed Java in popularity this year, both when it comes to answers from all respondents and answers from professional developers only. SO analysts indicate that as Python has edged out Java, C# and PHP in recent years, it has become the fastest-growing major programming language today. 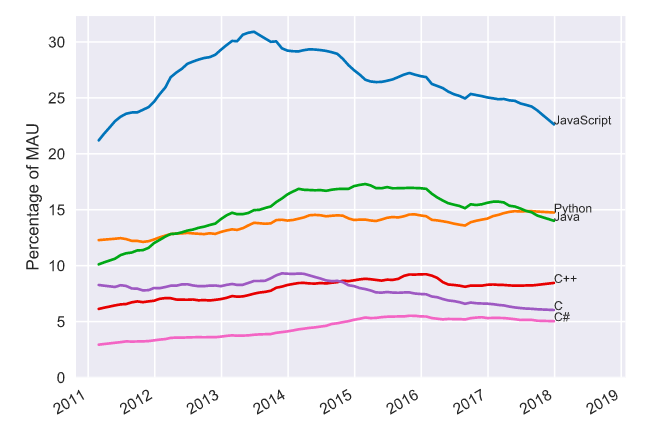 Other rankings comparing Python vs Java in numbers

Python vs Java from the managerial perspective

Project managers and CTOs use different criteria when assessing the usability of a programming language compared to learners, developers, and engineers. We delve into some of the most important aspects of software development from a managerial and institutional perspective below.

Java vs Python: Scalability and flexibility

Python vs Java from developer perspective

Both Python and Java are open-source and boast huge and active communities which contribute to the languages themselves and offer support for newcomers and experienced users alike. Additionally, both languages come with a wide array of libraries, created and supported by the community.

Python impresses most with developer productivity, as it allows for fast development of applications and less person-hours. Java, on the other hand, compiles faster, but neither language is a top speed performer. Both programming languages are aided by a vast array of libraries and an involved and supportive programming community.

In terms of preferred language for a given project, Python is ideal for projects that benefit from speedy development and a lower budget. It is also perfect for applications developed under the MVP model, and projects that require sophisticated data analytics and data visualization. Java on the other hand seems to suit mobile app development best, as it is one of Android’s preferred programming languages. It is also widely popular in the banking sector, with a proven security record.

Python vs Java: differences and uses